When will Women be Believed? Thomas Martin Saturday 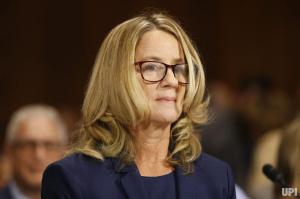 27 years after the Anita Hill debacle, has come the Christine Blasey-Ford controversary. This week thoughtful people wondered if we have learned to accept what women tell us with the same weight given to what men tell us. Anita Hill was victimized by a group of men who while acknowledging her suffering, refused to believe what they heard.

Yesterday, we heard an adult professional psychology professor tell us that she was 100% certain that Bret Kavanaugh attacked her with the help of Mark Judge while all of them were in high school. Ford may be the most authentic witness ever seen in cases of sexual assault.

How did the Senate Judiciary Committee do with Anita Hill 2.0? Well, here the results are split with contrary results that just happen to be by party. But it is not partisan politics that led to this result. It was whether or not women can be believed when they give creditable testimony before public bodies or in a court of law. The sharp differences between Republicans and Democrats had to do with the views about gender held by the two parties.

Republicans uniformly had sympathy for what Dr. Ford had gone through. But not one of the eleven men could say they believed her; not one. The fact that after 27 years the Republican Party has yet to put a single woman on the committee is damming. Back in 1991 the entire Senate Judiciary Committee was composed of men. None of them covered themselves in glory. But much has changed in 27 years. So now there are four women on the committee; all Democrats. Even the men could not do a Joe Biden impression this time out because like the women they believe this woman. It does not prove who is right, but it did cry out for the brief FBI investigation that Christine Blasey-Ford has demanded. Bret Kavanaugh has refused to submit himself to a re-opened investigation or background check. The other man allegedly present, Mark Judge, is hiding out near a beachfront house and has only submitted a statement via his lawyer.

Uniformly, these Republican dinosaurs failed to give Dr. Ford full agency as an equal citizen of the United States. Instead, they put themselves in the role of male protector, imagining if this was their wife, mother, sister, or child. So they could not but give greater weight to what Judge Kavanaugh had said in his hysterical rant yesterday. Kavanaugh was never able to exhibit the self-control you’d expect of a Supreme Court Justice at any time. He went on a 45 minute plus rant yelling and almost screaming in self-righteous indignation for having charges being made against his almost perfect life he says he has lived.

He constantly interrupted Senators of the Democratic Party in ways that prevented them from asking full questions that they had. He listened and answered questions of the other party in a more quiet and relaxed manner.

Then there is the chest thumping done by the all male Senate Judiciary Committee Republican Choir. Senator Lindsay Graham was so unhinged I thought he might at one point come across or over to Diane Feinstein or Dick Durbin and physically attack them like Preston Brooks did Senator Charles Sumner on the Senate Floor in 1856. I don’t know what this says, but both Graham and Brooks are South Carolinians.

At the 11th hour, Republican Senator Jeff Flake was caught with his conscience hanging out. He called for an FBI investigation. He indicated he wanted a week’s delay. But note that this nomination has gone to the full Senate. Senate Majority Leader Mitch McConnell now can bring the nomination to a full vote at any time of his choosing. Senator Flake did not say he believes Christine Blasey-Ford. He could have voted “No” forcing the Committee to wait for such an investigation. It now goes to President Trump to authorize an FBI investigation. At this hour we do not know if Trump will agree with Senator Flake’s proposal. Now what do GOP Senators Lisa Murkowski and Susan Collins think? Heidi Heikamp, Joe Manscian, and another Democratic senator indicate they will vote for Kavanaugh. Has Flake’s action changed their minds? If Trump says no to the FBI investigation, the vote in the Senate proceeds.

But we are left with the distinct gender politics in this situation. If a man who was in Ford’s place had testified with such clarity, honesty, and integrity, we know it would have mattered even more. Millions of sex assault victims in this nation who are women customarily struggle to be believed. Thousands of men who as young boys were molested by Catholic priests are uniformly believed by all. This self-evident dichotomy ought not be present in such strength 27 years after Anita Hill taught us that these gender differences had to be closed so that all men and women can be heard with equal weight.

This nation needs the truth in this matter.