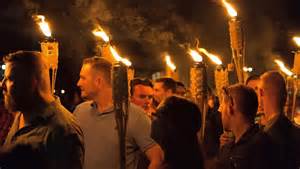 When Donald Trump painted a picture of dark carnage and apocalypse at his inauguration a year ago Americans rightly discerned something was deeply wrong. Nowhere was the youthful optimism of the American character or waxing eloquent on the promise of American democracy to be found in the speech. He asserted that the American dream was dead. I remember wondering, what was the point of being the United States of America anymore, or retaining any pride in the democratic experiment.

The year since has not made me any more optimistic. The Trump campaign, like his presidency to date, is fueled by hate; hatred and bigotry against people of color, against foreigners, the LGBTQI community, against any religion not Christianity. There is a strong authoritarian element that rather than defending the Constitution, seeks to attack democratic institutions at every point. It is a useful reminder to note that the President took an oath a year ago to “preserve, protect, and defend the Constitution of the United States.” His failure to do so could, in itself, be an impeachable offense.

The other feature of the emerging Trump Era is a complete capitulation to multinational corporations and the ultra-rich. Democrats and Republicans alike have always catered to them, but in the Trump White House and the GOP Congress the switch from democracy to an oligarchy is near complete. The recent passage of the Tax Bill enshrines it into law.

Central to the inability of our government to reflect the will of the people and to actually work for them is something that is a direct legacy of Ronald Reagan. Reagan came into office telling Americans that “government is the problem.” At the moment in 1981 when he uttered those words there may indeed have been some truth to the declaration.

But since, it has become an iron law of right action for the Republican Party that government itself is a pernicious evil, rather than an engine of democracy and a means to mediate competing interests in American society. And most Americans now have come to believe it too. With endless repetition we are told that government must be made so small as to be “strangled to death in a bathtub.” This view is so contrary to our founder’s conception of the efficacy of democracy and republican government for promoting our lives as a free people as to render our present version almost unrecognizable.

Yes, they were for limited government. There must be a wide area of freedom of citizens to be free of an overweening government. But nowhere will you find a defense of the Constitution based on the primacy of corporations and the rich, and directly assaulting the very conception of government. John Adams was concerned that material prosperity would result in Americans prostituting themselves to that over the foundational principles of a government by and for the people at large.

The principal of the common good over naked self- interest has taken such a beating that the poor themselves are blamed for their own poverty. Our capitalist system is unable to provide for millions upon millions of Americans even amidst the Stock Market reaching the 25,000 level for the first time in the history of the market! We are in the eighth year of a full economic recovery, yet wages have been largely stagnant. Working people are simply not sharing in all this rampant prosperity.

Workers simply no longer have the full protections of Unions to provide a voice for their complaints and to mediate the rapacious behavior of the corporations.

And the nation is suffering as a result. Corporate business lobbyists seeking to maximize profit have abdicated the responsibility of large business and the rich to pay their fair share of taxes to support an effective government. This is the legacy of Ronald Reagan. Virtually every other advanced nation on Earth provides itself with the resources to govern effectively, and to advance the quality of life of its citizens. We no longer do. With the exception of the defense budget, the United States is badly under resourced.

There have been no significant national infrastructure improvements since the 1970’s. Our roads, bridges, our airports, our rail system, and electrical network largely date from that time. Other nations are moving ahead rapidly and the contrasts are glaring if you travel overseas. These things benefit us all.

Our people struggle to obtain health insurance when again; virtually every other nation has a substantial and effective health care system for its citizens.

The provisions for the elderly, sick, and disabled are under attack. The Congress is slated to take up what is called “reform” of the Social Security, Medicare and Medicaid systems. That is code for deep cuts to those programs. Privatization will no longer guarantee what little the people do have under programs they have paid into all their working lives.

This effort on the part of the GOP undertaken over many years since 1981 to “strangle government in a bathtub” promotes a falsified freedom; denies it to the largest share of our population by reducing their opportunities and options in pursuing “life liberty and the pursuit of happiness.”

This nation has the resources to provide for its people within a free market economy. It is simply that those resources have been redistributed upward, to a narrow- minded and selfish elite over the past forty years. The government patient is struggling for breath. The strangulation is near complete now.

The ability of our government to act to promote the common good, to effectuate the general welfare, has been seriously impeded. Government ultimately is not the problem. Providing a government full of transparency, and accountability is the chief concern.

We have a new ethos that reflects a hostility to education—something that we have not seen in our history. Ignorance is now elevated to a virtue. In 1958, education was seen as so vital that it was a serious issue of national security. Sputnik brought home our need to intensify science education to compete against our foes in the world. The product was the National Security Education Act of that year.

This brings my argument full circle to where we are at this moment after a year of Trumpism and, in effect, forty years of Reaganism.

The hyper low taxes on the wealthy and the corporations have starved the United States of the ability to do much of anything for the common good of our people.

That Trump inauguration speech and the course he has set is full of pessimism, fear, anger and hate. It amplifies the darkness over the light. There are no grand projects our people can undertake together for the good of all. There is no optimism. There is no powerful defense of democracy itself. Trump has set the goal of reaching Mars. But that goal is underfunded like the rest, and it is an inarticulate and largely meaningless declaration.

The realm of the American imagination and the belief in our government as the “best hope of earth” has been shrunken down to a mere skeleton of itself. The American dream is not dead. It is the will of Republicans throughout our government that this be so. Government is the best effectuator of the common good. Without it, we are adrift on a sea of despair in a lifeboat with no oars or sail, without provisions, and any sight of the Promised Land.