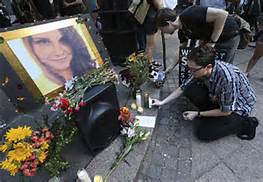 The Charlottesville conclave of Nazi white supremacists this past weekend is itself a sad chapter in American history. While they have a Constitutional right to their views, and to express them in public, they do not have the right to terrorize people of color, and those who are of a non-majority religious status. Neither should they be given a morally equivalent status to those who stand for democracy and a more inclusive America that cherishes every single American citizen. It is what the United States has declared in its founding documents and continues to strive to perfect.

Interviews with several Nazi leaders present in Charlottesville reveal an ideology opposed to democracy, something our founders stood for with clarity. They seek and I quote “a Bolsheviki dictatorship” aimed at removing all people of color and anyone opposing them. The new government would establish a white ethno state. That would eliminate the entire LGBTQ community, Blacks and Latinos, Asians, Muslims, Jews and more. Just how that removal would be accomplished is murky, but should they gain control it would be bloody and a new world Holocaust would emerge.

These white supremacists repudiate the government of the Founders entirely. The movement is built on hate and prejudice and little else. Is this what our World war II Veterans, including members of my own family fought for in that conflict? NO. They fought against this monstrous evil, and helped to destroy it in 1945. That evil has returned in strength right in the nation that bravely stood against it in that war.

We have a right to expect our Presidents to condemn Nazi ideology outright. President Trump failed to accomplish that on Tuesday. Worst of all, he equated those who stood bravely against white supremacists in Charlottesville as being on the same moral level as those who propound such anti-democratic and un-American ideas.

What we saw in the lobby of Trump Tower was a President who could not heal America at all. In an unhinged meltdown with reporters there he proceeded to give aid and comfort to those who seek to destroy the United States of America. Trump cannot walk this back. He now owns it for all time. This has already gone down in history as a shameful incident. Foreign leaders are criticizing Trump as they must. That too is a moral imperative.

There are nine more national gatherings of the Un-American Nazis are scheduled, one in Boston, this very weekend. In prelude to that demonstration the Boston Jewish Holocaust Memorial was vandalized on Tuesday night. Notably, not long after the President’s moral failure Tuesday. White supremacists across the land are praising what Trump said, and they are thanking him knowing that their movement just got the blessing of the President of the United States. Yes, the rot goes that deep.

Notably, this column is not an attack on conservatives, or the GOP. Those people themselves, who lead that part of the American polity, are condemning what happened in Charlottesville and rejecting the Nazi ideology as they should. We all must ask why couldn’t Trump do what is a slam dunk for any patriotic American?

How do we respond to the frighteningly evil Nazi ideology that is poisoning our nation? We cannot as Dr. King noted respond to hate with hate. We must use forgiveness and love.

Yet, this does not mean we turn our backs on this evil slithering its way into every city in the land. We first have to make it clear who was in the wrong, and the moral imperative to act against such racial and ethnic hatreds, and of plans to destroy our country and establish a new nation based on the opposite principles our Founders expressed in establishing the United States of America.

Yes, those Founders were largely slaveholders. And history rightly is critical of them for that. The founding of the United States said to the world that we as a core principle believe and always have believed that “all men (humankind) are created equal. That they are endowed by their Creator with certain inalienable rights that among these are life, liberty, and the pursuit of happiness.” We fought a horrible Civil War, the bloodiest military event in our entire history to date to affirm that principle.

The Union victory in that war affirmed that the Confederacy was trying to break up that Union with treasonous intent and they failed. That “a new birth of freedom” would now bring in the newly freed slaves and begin the process of bringing them eventually to a position of political equality with white citizens. We have yet to establish people of color in a position of real economic and social equality even now, in 2017.

As to Jews and Muslims, they face annihilation should these America-born Nazis gain control of the government of the United States, for it is their declared intent to do so.

As the mother of Heather Hyer challenged us all to do, each of us faces the very same moral imperative that she met so nobly. We must stand against this evil with one voice. Non-violently and affirming the core principle of our nation exposes us to the hatred of these people. Heather was not afraid. Neither should we live in fear or turn our backs to evil when we encounter it.

Oh no, Mr. President, the moral clarity shown by Heather is something you failed to show this past week. Just which side are you on Mr. President? The ultimate answer to that needs to be sought and made known. Our very lives and our democracy depend upon it.