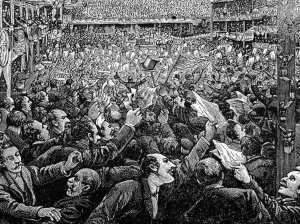 Gather round Trump supporters for I am going to look at things your way. There is a catch though, I thought it necessary to tell you the facts, or reality as it is tonight Let’s come out swinging and punching here and say Obamacare was and is a disaster and it must be repealed and then replaced with something better.

When John McCain cast that deciding vote on Tuesday to proceed to debate no less than three bills with a fourth on the way, and without involving a single Democrat– damn them, we all rejoiced.

But things have now hit a snag. Alternative facts won’t get you healthcare right?

The three main bills being considered, and now rejected, have been scored by the CBO with a Republican appointee both Ryan and McConnell approved of showing that under these plans 16 million, 23 million or 32 million Americans will lose their healthcare outright.

It’s great to ram something through and watch Democrats shit their pants! You bet!

But after the laughing and festivities have gone silent, we sense that those totals are actually a lot of people, and a lot of you guys are going to take one for the team here, and be without real insurance coverage. Oh, you twenty somethings believing you are invincible really don’t care and that’s fine. Those of you who care a bit will be able to buy a junk policy for a hundred bucks a month covering say cancer or a motorcycle accident that leaves you in a wheel chair. It covers nothing else. The deductible will be higher than Trump Tower of course. Those of you in middle age with one or more kids and married will find that ear infections in the little buggers without insurance will cost plenty.

Now this legislating at no time has involved a single Democrat in either house of Congress, even though Democrats are actually (again the damn facts intrude) eager to help put something together knowing they are in the minority, and they will get only a small portion of what they want. But our leaders have kept different versions of the bill secret, even from most Republican legislators. They are not even following the rules of the Senate.

Tonight the Senate is voting on a bill that does not have a text or written copy to look at yet. And Senators do not know if the House would be able to go to conference committee where they might actually figure out what the fuck they’re doing. Paul Ryan today declared under an obscure House rule what is called “Martial Law.” They vote to pass whatever the skinny bill is and it goes to the House, they vote on it perhaps tonight and Trump signs it tomorrow. This being without most legislators on our side knowing what the hell they just did to one sixth of our economy and to millions of us!

But a whole bunch of GOP Senators want to talk to the House members in conference committee first, but Ryan is balking at that. They really don’t know just what they will be passing at all. Again the Democrats are just bystanders NOT being allowed to do a thing. Regular order should have had the bill or bills introduced by sponsors and then sent to committees concerned with the legislation so that those experts and members of the public who support each version or opposing the bills could share their concerns with Congress.

Now the big problem with all those tens of millions of humans—real people losing their health insurance, is those GOP bundlers and donors wanting a huge tax cut. The cash will come from Medicaid to the tune of $770 billion dollars, the first looting of your Medicare to the tune of $220 billion dollars, and some more to round it up to a cool $1.2 trillion dollars over anywhere from seven, to ten, to 15 years. Can’t wait to see that tax cut on your pay stub? Me too! But if you earn less than $150,000, you get between twenty and a hundred bucks. The people in the top two percent get the rest. Good deal?

Now, I think you’re savvy enough to figure out that taking $1.2 trillion out of Medicaid and Medicare, and the tax on medical equipment (that was for your subsidies under that horrible Obamacare) does not actually deliver healthcare to you.

Now we all shuddered as 24 million Americans got healthcare for the first time over the past seven years of trial with Obama as our hapless president, so called.

What gets interesting at this point of the discussion is that many of you in the Make America Great Again cap wearing Trump thongs all over the nation got healthcare that really covered something. It makes us mad that it had anything to do with Obama! Not all those 24 million were black and Latino Democrats wanting to feed at the government trough, however. Many of you in the flyover genuine American part of the country benefitted from this and you probably like it somewhat but we’re never going to admit it.

It now begins to dawn on you that what the Grand Old Party wants to do to drain the swamp won’t include that something better we really all did want with the help of Donald J. Trump. I know I did, and when not writing for the Republican conservative audience, I am a lefty liberal, oh sorry, libtard! And I hoped our new president would deliver and make me a liar when I said he won’t be able to do it.

Now cut to the Oval Office and the West Wing. Donald Trump is busy throwing out all those men wearing dresses from our military. Great! But he is not doing a whole lot to push a solution, although he is cheerleading attitudinally quite well, thank you. And like the thug we love, he is telling Susan Collins and Lisa Murkowski that their states will lose all Federal funding if they do not vote for whatever that thing is. We just don’t know. It looks a great deal like abuse of power for the impeachment game but what sweet blackmail.

Anthony Scaramucci, the new slick Communications Director at the White House gave an interview to Ryan Lizza of the New Yorker magazine. He’s plugging the leaks and rooting out the miscreants. He said Reince Priebus, the White House Chief of Staff, is a “paranoid schizophrenic, a paranoiac.” That’s telling ‘em Mooch! Better yet he went after Steve Bannon too, whom he immediately despises. “I’m not Steve Bannon,” Scaramucci added, “I’m not trying to suck my own cock.” And aren’t we all glad, and impressed too!

Sad to say, we can’t blame this wonderful swamp draining chaos on those fucking libtards can we? Nope. I know you want to but it just ain’t so Joe.

2018 is looking bright for our side but what if we get millions of Republicans being screwed over prior to the election, and running on into 2020? We know the liberals are going to scream bloody blue murder and we just love that. OK.

In that part of our brain reserved for cock ups we just know this thing is going to be a real stinker. And as the liberals and Democrats have been locked out, all the bloviating on Fox News we’ll do– even false ads saying it is their fault won’t be enough. People already know we’re in it up to our necks.

The final score here is that we own this mess now. We are the guys who got control of the House, Senate, and the Presidency Boo-Rah! And we have a 5-4 majority on the Supreme Court to wrap it up nice and sweet. Fuck! We’re in for a thumping defeat in 2018 with you- know- who becoming Speaker of the House. Yeah, I know it gives you nausea and gas.

The American people know that whatever comes out of the legislative sausage grinder here will reverberate for years and years to come. And that conservative Republicans are the ones who done it! How’s that sound now?