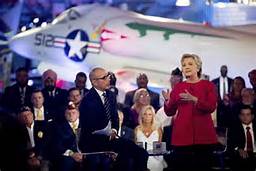 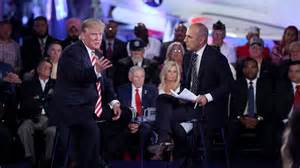 Late Nineteenth Century Speaker of the House Thomas B. Reed said that a statesman was a dead politician. Voters seem to have an aversion to anyone who engages in politics. Though Trump is a businessman, and not a politician prior to his run, once he sought the nation’s highest office, campaigned and was interviewed he became the thing all the other politicians were. Abraham Lincoln was a career politician.

So it is not being a politician that makes you automatically corrupt or suspect. It is what you say, and what your policies are on any number of issues, and what you have done while in office that we focus on. For Trump it is and has to be his business record and his statements on policy and the people of the United States.

Last night Hillary Clinton faced a barrage of questions from NBC’s Matt Lauer about her e-mails. She answered each question directly and factually, and at no point did she lose her cool. When Lauer deigned to finally permit her to field questions from a very few veterans, she demonstrated her experience and working knowledge of our foreign policy and defense needs, and the fight against ISIS. She also had an easy facility with the language of veteran’s issues and the VA.

But here was the first and greatest problem with the forum. NBC had allotted only thirty minutes for each candidate to field questions from Lauer, and then from the assembled veterans on the Carrier Intrepid Museum in New York City.

Clinton acknowledged she made a mistake in voting for the Iraq war. Yet there was no simple acknowledgement or reminder that the George W. Bush Administration led the charge and deceived the Congress and the American people. Her vote alone was in no way sufficient to go to war. There were hundreds of members of the Congress who made that very decision. Yet Clinton said she has taken full responsibility for her vote. She has since 2008.

Matt Lauer focused most of Clinton’s time on the e-mail question, and the vote for the Iraq war. When she was asked about the Iran Nuclear Deal he hurried Clinton to finish an answer that she correctly demonstrated required more context.

When Trump appeared for his thirty minute interview and fielding veteran’s questions Lauer was content to let Trump talk on largely unchallenged as to facts. There were no follow up questions, where for Clinton he went right after her the way a reporter should.

When Trump asserted that he was against the war in Iraq from the beginning, Lauer did not point out the obvious fact that Trump was in favor of the war up until 2004 when just about all Americans knew it had been a big mistake.

Nevertheless, it was what Trump did say last night that should indicate to even the least informed voters that he just is not qualified to exercise the function of Commander-In-Chief.

Trump said yet again that Putin was a great leader whom he admired and feels very comfortable with him. By contrast the New York billionaire identified President Obama as a poor leader, our generals as “being in the rubble.” He said our military was not prepared to fight, a slight to all the servicemen and women in the room and around the nation and world. For Mr. America First, the characterization of his fascination and comradery with a foreign leader who is an authoritarian strongman, and not our elected president, he was insulting veterans and placing America last.

He knew nothing of the military justice system or Judge Advocates General who handle sexual assault cases within the chain of command. He was unaware of the initiative of Senator Kirsten Jillibrand to get the legal process in these cases outside the chain of command where commanders have a vested interest in minimizing complaints.

But it was his statement that anytime you have men and women together you are going to have a lot of rape, seeming to imply that the women ought not be there since they permit rape to happen. He later tweeted this doubling down on this sexist attitude.

Trump also discussed his intelligence briefings and told the world that the body language of the briefers who he said were very dissatisfied with Obama’s leadership, and with the generals leadership. If true that piece of intelligence has been leaked to our enemies and is itself a breach of protocol concerning those very briefings.

Trump stated he was going to get rid of the generals and put generals in that he thought were the best, totally bypassing how our military operates and the chain of command.

He bragged that he got a Mexican cabinet minister fired as if it was his tough bargaining that did it. Instead it reflects the decision to even invite Trump in the first place.

He also said that he would have got the oil out of Iraq to deprive ISIS of a beginning. ISIS began in 2006 as a part o f Al Quida. The oil did help finance them, but it does not explain their rise. And getting that oil would be under international law illegal. And the force needed to for many years protect our looting their oil fields in contravention to international law would take a large force for many years with many “boots on the ground.” Presently their ability to get the oil and make use of it for money has been seriously interdicted by our air power aimed at the trucks to carry it and taking back oil fields that would provide the oil.

There has been so much this year that has come from Trump himself that demonstrates just what a poor president he would be, and how his temperament can so easily be manipulated. Saying he would endanger our national security is not hyperbole. It is simply reality.