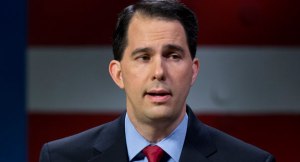 “Our intent with these changes was to encourage a deliberative process with state agencies in developing policy and legislation.”

Translation from Government Speak: We needed a means of hiding from view any discussions or actions on policy we take that may be interpreted as politically damaging, unethical, immoral, or illegal.

Wisconsin’s government has operated and developed policy without trouble since that Open Records Law was passed. No State official had anything to fear and still does not, if they are avoiding hurting people, using their office merely for personal or partisan gain, or hiding their breaking of State law. This is something Walker and his aides, along with far too many Republicans, wish to do or need to do. What are they hiding?

The Milwaukee Journal-Sentinel reports that the governor’s office has responded to a number of public records requests over the past couple of months as if the changes were already in effect. The Green Bay Press Gazette took a poll and found 83% of their readers thought Walker was responsible just prior to the acknowledgement Tuesday.

“We tried to put something together we thought that made sense. But it’s not going to be accepted publicly and that’s why we’re pulling it back today.”

It makes sense to them as they have so much to hide. The manner in which Wisconsin has operated with such Republican control of State government as both houses of the legislature have Republican majorities, the governors’ chair, and a 4-3 majority on the Wisconsin Supreme Court leads them to think they can do anything because they have the votes. They can, but should they? In earlier days judges might be more liberal or conservative, but were not as partisan as they are now. When Democrats had too much control via majorities and a Democratic Party governor, they suffered from the same arrogance and overreach.

“I don’t know anyone who has demonstrated that we have a problem with too much openness in Wisconsin.”

-Bill Lueders President of the Wisconsin Freedom of Information Council

Quite true. This is yet another example of Republican lawmakers looking to fix a problem that does not exist. Democrats have yet to operate this way. (see Voter ID laws to stop waves of fraudulent voting.) The only conclusion a rational and intelligent observer can reach is that they were doing this for their benefit and not ours.

In related action a budget amendment to the State’s Biennial Budget, ending Wisconsin’s prevailing wage law by units of local government. The move will lower wages in Wisconsin for Wisconsin people who work for a wage for others. That is a big group. It also takes paying the prevailing wage out of the hands of local and county governments, especially Milwaukee County.

What impact this might have on national journalists looking for how Walker governs to have achieved his version of the Wisconsin Miracle will find a fertile field to raise questions and deep concerns about Walker’s fundamental honesty, and ability to work with opponents. Struggles for Justice has long contended the Governor simply lies far too much, and demonstrably by the record has sought to harm a large body of Wisconsinites regarding their employment and wages.