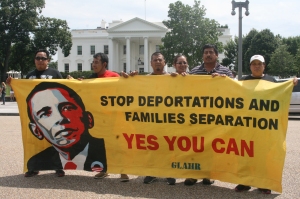 President Barack Obama announced he is taking a number of executive actions to shield up to five million persons from being deported and ripped apart from their families Thursday night. All the beneficiaries are undocumented or illegal immigrants. They have to have been here five years or longer, or the parents of Dreamer children covered by Dacha. They can later apply for a green card, but there is no path to citizenship or the ability to vote in upcoming elections. Those with criminal records or ties to terrorist organizations will be deported. The President also indicated he is sending more resources to further curtail illegal immigration to the United States by migrants who come by boat, air, and our borders with other nations effective forthwith.

Republicans are already howling mad at what the President has done. Impeachment, government shutdown, arresting, jailing, and prosecuting the President, and refusing to fund our government are just a few of the contemplated responses from the Republican opposition. President Obama has made more enemies tonight, if that is possible, and derailed any immigration reform via the Congress until a new Republican president takes office on 20 January 2017. If a Democrat wins, nothing will change from Republicans.

It is very hard to see how Republican leaders can reign in a nation, a majority of Americans who want the President’s head for not letting Republicans govern over this. House Speaker John Boehner warned that cooperation from the House is going to end if the President did what he did tonight. Politically, the President and Democrats committed political suicide this evening. Polls show the President’s popularity spiking ever downward. Polls show most Americans do not favor what he did unilaterally just a couple of hours ago as I write.

But none of this matters a tinker’s damn. What matters is what happens to human beings from loving families who work hard and with the exception of coming outside our laws as migrants pose no threat to the United States. They pick our vegetables and fruit. They clean our hotels, do landscaping for big companies, and are decent honorable people.

I stand with these people: all eleven million of them save for the criminals and terrorists. I care not for what others may think of this, or how much they may hate me for it. I welcome their hatred. I return love and compassion to all. My faith, Christianity commands through the Lord Jesus the Christ to love the stranger, to welcome them, and care for them. So I do that knowing I’ll lose some friends I’ve valued.

It’s been 512 days since the United States Senate passed a bi-partisan comprehensive immigration law with 68 votes in the affirmative. The House of Representatives has not formed a conference committee to iron out potential and real differences, they have not voted on the bill. Hell, they have not even brought it up on the House floor for debate. President Obama warned that inaction by the Congress, specifically most Republicans who oppose the measure to debate the bill, add amendments to it, and conference with the Senate over it and pass it into law would lead him to act unilaterally to protect millions of human beings who’ve not threatened a fly.

Fees and fines are to be paid with these executive actions, making those covered accountable and whole with the Government of the United States. Coming to this country illegally is punishable by deportation or a civil fine or both. It is not a criminal act in the full legal sense.

What is heartrending to people like me with more than the tiniest fraction of compassion, is that a little girl or boy aged from five, when most of us have clear and sharp memories, onward to maturity who was born in this country and knows no other, could be separated from both parents, and placed in foster care until they reach their majority. They never will see their parents again until such time as they become legal immigrants or citizens.

There are people called Dreamers who are excelling at our universities, working hard and well in our public schools, private schools, and even tonight serving, and yes dying serving our nation in the military, who will be demonized by Republican conservatives and Americans who view people with brown skin coming from Latin America as a sort of demon spawn that will destroy them.

It’s just plain old racial bigotry undisguised, and right there for those inclined to give it full voice.

There are just as many, nay more, immigrants coming from Asia, the Middle East, and good old Northern Europe. They get visas to visit us and overstay those visas, sliding into obscurity within the legal system. It’s the classy way to violate immigration law. Running, hiding, sweating, and dying in the desert are how it goes for the others. They are darker, brown, even black sometimes and they remind white Americans of criminals in prison since color equals criminality to too many of us.

For an undocumented immigrant, life is a constant series of evasions, fear, hopelessness, unrelieved work for much less than others would receive. They cannot simply live normal lives. They are in the shadows instead of the bright sunshine of social acceptance and brotherhood, and sisterhood.

They haven’t wanted to be there. But they have been put there at the fear of prison time, deportation to a nation they never lived in, and more. Most cannot even obtain a driver’s license, and those that can in those states permitting it, might be deported since local law enforcement participating in a program called “secure communities” has parents placed in Federal custody by Immigration Customs Enforcement (ICE) within 72 hours, and the kids scooped up and put in juvenile detention, then foster care, and never seeing mom or dad again. Such fun.

That is what we are as Americans today, not what we might become. The President in his Immigration Address this evening asked repeatedly if this is what we want to be as a nation. For too many Americans this is how they want it. It elevates their humanity over others in the very same way that slaves provided slaveholders with the same white supremacist ideology and way of life.

Historically, what President Obama did tonight is fully within the Constitution of the United States and long, deep, and wide, legal precedent going back to George Washington. However a politicized Supreme Court sees it, the Republican base sees it, feels it, hates it, the historic fact is that this is nothing new, nor is it outside the bounds of what a President of the United States can legally do. The Congress can and probably will remove President Obama from office before his second term is completed, or force him to resign in disgrace before all history.

But you people are irrelevant to what is socially just and right. You don’t matter to your maker when it comes to consideration of your views, your expressions of hatred, and your crass ignorance of compassion and generosity. Republicans do not matter. The polls, pundits, and partisans of politics don’t matter. I don’t matter.

But justice does! It is the fullest expression of humanity, dignity and right available to we mortal humans. God in all his power loves those who fight for it nonviolently and with love for others. Despite my harsh words, in the end my distaste for you who cannot be compassionate here, sensible here and more, is not worth holding on to. So I cast it away and ask God to send me more love and compassion. She’ll get it done. She always does.

God bless the President for doing what is right, and not simply popular in the moment. God bless those here as undocumented people. For we Christians look to the shared human experience and God’s common creation of us with our very first loyalties.

Five million people will have improved lives at least until 20 January 2017, or until Joe Biden were to decide to reverse what President Obama did tonight, or our Supreme Court forces him to do so. If the Courts speak and reverse this as unconstitutional, this will in fact be more than judicial activism. It will signify the full politicization of the body that interprets our laws, legal precedents, and the principles of what it means to have liberty and freedom and human dignity.

Barack Hussein Obama did the right thing tonight. He is fighting for social justice tonight. All of us who support the undocumented community of eleven plus million persons who have been with us for anywhere from a year or ten to twenty years is struggling for social justice. I’m proud to say I stand with them. Where will you stand tomorrow?