by Thomas Martin Saturday for Struggles for Justice 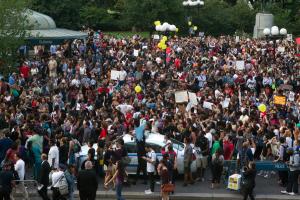 Darryn Wilson Has Yet to Explain Why He Shot Michael Brown Five Times Outside his squad car, after the struggle at the car.

The New York Times yesterday published a front-page story gained from sources close to the Justice Department’s investigation of Civil Rights questions in the Michael Brown shooting case that appears to exonerate the police officer. But that information is highly limited and prejudicial to any prosecution of Brown, to say nothing of justice in the case.

That story notes a struggle between the officer, and Michael Brown, where two shots were fired from the car. One hit Brown on the arm, and the other missed, hitting an interior wall panel. The idea that there was so much of Brown’s blood on the gun, in the car, and on Daryn Wilson’s uniform has been by the national media interpreted to mean that Brown was the aggressor and was struggling to get Wilson’s gun. Thus, the first two shots were justified. Here Wilson was simply doing his duty to protect his very life.

But ten more shots were fired at Brown by Wilson as Brown was fleeing the scene, and this account is backed up by multiple witnesses who were present at the shooting. This is now the vital question as once a police officer is no longer in fear of his life, and the circumstances show it was no longer a factor, police officers are no longer justified in using deadly force.

So what justified Wilson in getting out of his car, and pursuing Brown, then emptying a clip of ten more bullets at Brown, five of them hitting the young man? Shooting a fleeing unarmed man multiple times is plainly excessive use of deadly force? We have yet to hear from Wilson any explanation at all. That is because there is no legal, justified excuse for gunning down an unarmed man.

We’ve never had the most routine of reports from the Ferguson Police Department that might tell us something about what happened. Just how aggressive is the county prosecutor pursing the arrest and indictment of Wilson? Black murder suspects would have been arrested on the spot, charged, arraigned, and have a trial date within 48 hours. It’s been two months and there is still no sign of an indictment. Yet there is far more evidence than is required for an arrest in this case.

Police officers do rightly have some latitude in pursuing criminal suspects, and using deadly force. But here the use of deadly force is so incredibly in excess of anything justified, complete with the fatal and last shot at close range, a head shot straight into Brown’s brain downward. What evidence we do have suggests that Wilson was enraged after his altercation with Brown, and simply was out of control and murdered the young man. There are witnesses in the double digits, and most of them fully credible, that show this was the case.

Why can’t the black, and for that matter, all the citizens of Ferguson, Missouri have an arrest? Arrest and indictment is NOT conviction for a crime, but merely getting this case before a jury in a court of law.

Fundamental human and social justice demands the arrest of Darryn Wilson no matter how tardy it will be. The people of Ferguson who have been victims of white plice harassment and over policing are not going away. They are already planning for what is a near certainty–the grand jury failing to return an indictment for any crime in the Brown murder case.

The people in Ferguson, and the United States Department of Justice will act on the basis of what they learned about policing in the town, and just how aggressive a hunt for an indictment it will be. The county prosecutor could have charged Wilson the same day, or just a few days following the killing. But he did not. Information about the case is being withheld with the idea it will keep things quiet. But the complete lack of transparency by law enforcement and the prosecutor in the case has had the opposite effect.