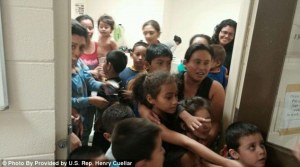 To listen to right-wingers, only now do they become immigration humanitarians, and their perception of the problem is that it’s all President Obama’s fault. The over forty-seven thousand children, who have come across our borders outside recognized immigration law recently, are too young to be concerned about what conservatives think.

Instead of Obama, growing violence that is real, and Coyotes who make millions off of them are driving this almost unprecedented increase in unaccompanied undocumented kids into our nation.

Their families pay up to five thousand dollars per child to have someone lead groups of them from Central America, not Mexico, to the U.S. any way they can get in. They don’t present near as much difficulty in taking them into custody, since they are bewildered and often abandoned or betrayed when they get here.

The twin truths about these circulated rumors that now is the time to come, is that they are circulated rumors, and a core calculation of parents that they will be turned over to Health and Human Services, where parents are reunited with them, in effect bypassing the quick deportation procedures that would apply if they had been accompanied by a parent.

If it were due to Obama’s relaxation of deportation of intact and non-criminal family units, we’d expect to have seen the dramatic increase much sooner. We have not.

Inadequate food and water at facilities way overburdened to provide them, and those of abuse of children via sexual assault, including verbal abuse of children not yet equipped to endure it without great harm, have been common among them. Add to that the denial of medical care. Sub-Standard facilities, and personnel lacking resources to care for the children, their lack of experience in dealing with them minus parents who can speak for them, have been to blame too.

It is not Barack Obama’s mess. These literal chickens have come home to roost because the United States, as a nation, cannot undertake long overdue immigration reform.

In essence, vulnerable children become innocent political footballs. More liberal elements in the U.S. have long favored and championed reform that is just, humanitarian changes in immigration policy, and practice.

Conservatives, on the other hand, have viciously opposed any immigration reform that does not severely punish other human beings driven by want, concern for their children, and the knowledge that the United States provides greater freedoms, opportunity, and a measure of stable government, though that now too seems in jeopardy. (Note: U.S. political polarization and rise of racial hate groups.)

The greatest sin of the Republic, one that has continued all through its history, is white supremacy. The end result has been hate, fear, denial, discrimination on a huge scale, and even death on a mass scale.

There has been a 92% increase in the number of unaccompanied children illegally crossing our border with Mexico just since last October. It is not Obama, but the refusal of people elected by the haters, to do what is right and crucially needed.

If President Obama can be blamed for anything, it is that he has overseen the greatest number of deportations and long- term detentions in modern American history. Conservative white immigration opponents should be wringing him by the hand in mass and thanking him. Commercial companies, where increasing numbers are tied to profits, ensure that the undocumented are victimized yet again.

Families are broken up with long-term consequences for all concerned. Even those who have applied for legal asylum, after threats on their lives, due to real and not imagined political unrest or ethnic strife, spend months and months in U.S. prisons with our worst criminals; 34,000 of them statistically, with data from 2010.

Are these the marks of a civilized nation? What will we say to our God when we must make the ultimate accounting?

No one, not even the immigrants themselves, oppose the full legal and right under international law, for the United States to control its borders, and to inculcate respect for the rule of law on the part of all its citizens of any status.

How much punishment is necessary to insure order in the land? It’s painfully obvious that deportations of criminals, and the worst repeat offenders, and the paying of a fine and a plea of no contest in court that they have evaded and broken our law among those offending less should be enough. There must be a clear and reasonable path to citizenship, not a 13 step obstacle curse that takes decades.

There is also the failure of white conservative immigration opponents to see the real monetary and contributive value of new citizens from predominately Latin America.

Now, some very alert and loving conservative white Evangelicals see the injustice, and raw human need, that requires reforms that go beyond just border security and hatred of the stranger. Christ taught precisely the opposite of the bigots in this land.

What is needed is a real ability to place ourselves where they are. What is called human empathy and compassion. The most extreme conservatives especially lack these qualities. Their emphasis is on retribution. Broadly, the empathy deficit of Republican and Tea Party Conservatives is among the greatest obstacles to humanitarian reforms in this area.

Can you people look any of those children directly in the eye for any length of time, and act the way you do? If you can, you are perhaps in danger of losing your very soul.

Yes, it is about the children, for they are all our children, and part of the great human family that gives us such opportunities to help others, justify our existence here on Earth, and make everyone whole.

Be resolved to change and open your collective eyes to justice, good, and right. Do it now.

Thomas Martin Saturday
For Struggles for Justice
“Speaking for the Voiceless, Protecting the Vulnerable”