Benghazi: “I Think the Terrorists Had Something to Do With It” 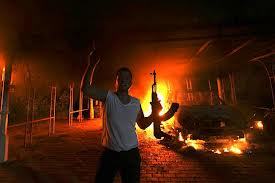 As still another independent study shows that Democrats’ claims that 8 million Americans had signed up for Obamacare were sadly true, and that 288,000 damn fools went to work, lowering unemployment to just 6.3% in April, Americans turn their anguished cries to the Benghazi scandal once again. Now, a President who spent a staggering $2.9 million to travel to Brussels to smoke weed and meet with Muslim terrorists in the shadow of NATO Headquarters and the Hague, has to face the fact that his scheme to kill four Americans at the U.S. Consulate in Benghazi hatched with Hillary Clinton and Susan Rice is exposed. It’s the proverbial smoking guns of the NRA Convention pointing right in his face.

Another document unearthed from the “shit load” of U.S. Government pieces of paper show that U.S. officials did, in truth, consult with each other about what to say about the Terrorist attack that took four Americans’ lives at the consulate in Benghazi, Libya in September 2012. How dare they!

A stunned Jay Carney, Obama’s Press Secretary, could only turn to the assembled White House Press Corps and offer this lame excuse:

“I THINK THE TERRORISTS HAD SOMETHING TO DO WITH IT.”

Just how could a motley group of Libyans assembled outside the Consulate do a thing? We had a couple of U.S. Marines there didn’t we? And more back in Tripoli just a two hours away. How could our scrambled fighter jets gunning down civilians in the Friends and Foes Alike Coupon Plan, in the darkness fail to get ‘er done?

Carney was asked about why the Administration had not spent more defending U.S. Embassies and Consulates around the world. He could only reply as before, off the record, that the Budget pressed by the House Republicans, and then passed by bi-partisan necessity cut over $300 million from funding for the defense of our diplomatic stations around the globe.

“President Reagan NEVER, EVER permitted such a thing, and Obama makes us looks weak to our enemies,” said Senator Lindsay Graham, also off the record. Some idiot from the New York Times then noted that in Lebanon in a 1984 attack 244 U.S. Marines were killed by a truck bomb. That leaves a surplus of two hundred-and-forty American lives for fresh scandals.

Meanwhile, in the U.S. Senate, Democrats began chanting in derision of their Republican Counterparts: “Lebanon! Lebanon! Lebanon!” Harry Reid said he plans to work with Congressman Daryl Issa, fresh from his success in rooting out the evil corruption of conservative hating IRS officials to work with him in getting to the bottom of it.

Carney was asked why the Administration had not released every document it had in its possession that could bear in any way on the Benghazi or Benghazigate as it is now being referred to.

All he could say was ” One of our NSA staffers, a Mr. Snowden, presently vacationing in Russia, has already made all those documents public. You can get it off his laptop if Mr. Putin has not already borrowed it.”

THIS HAS BEEN A WORK OF HUMOR AND SATIRE LACED WITH DEADLY FACTS. NO ANIMALS, WELFARE RECIPIENTS, OR COMPASSIONATE HUMANS WERE HARMED DOING THIS EXPERIMENT.