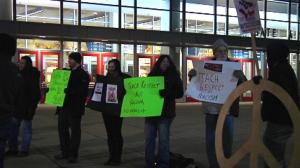 Carrying signs, placards, and with a senior Menominee and Pottawatomi tribal elder and spiritual leader waving an American flag with a Native-American figure etched into its fabric, denoting how central indigenous people are to Wisconsin and North America; some 35 Madison Area Native Leaders and Allies staged a peaceful and respectful protest against the continued use of the “Indian” nickname and logo by the Mukwonago Area Schools and its Mukwonago High School.

Rachel Byington, a Choctaw woman, and Board Member of the Wisconsin Indian Education Association (WIEA) and its attendant Mascot/Logo Taskforce, led by Barbara Munson, an Oneida woman, explained why they were there Friday evening in a stiff late winter wind in front of the Kohl Center where Mukwonago was playing a semifinal game:

“Stereotyping images of native people have no place in Wisconsin’s schools and are harmful to the self-image of native students, yet Mukwonago insists that their mascot the “Indians” is respectful and will not be changed. This is in spite of many efforts spanning many years to communicate, educate, and to reach out to School Board Members about the problems with using race and culture’s of people as a sports mascot.”

Byington attended Madison schools. Jill Gonzalez and Key Jackson also of the WIEA Board were also on hand and lent their full support.

University of Wisconsin Lecturer Paula Mohan did much to help organize the on-the-ground Madison part of the protest. After School Board Members heard from three speakers at their 24 February Board Meeting led by Dr. Sandra Shedivy on this subject, off they go to Madison expecting a good game and their “Indians” to be seen by a statewide sports audience, and there in front of them were 35 stout and hardy people standing for justice. They cannot evade the issue. Hundreds of Mukwonago students, parents, and community members looked in the face of truth and what is right and their faces told a story of denial and a wish to turn their backs on doing what is right. They won’t be able to.

This issue has gone viral and national. House Minority Leader Nancy Pelosi, (D-Calif.) yesterday told reporters that she thinks it’s time for the U.S. Patent Office to stop recognizing the Washington D.C. NFL franchise, the “Redskins.” Late last year a number of sports and news organizations decided to drop the patently race-based and derogatory name from all their sports stories and news items in future. More of that is coming for the Kansas City Chiefs, the Cleveland “Indians” and the list goes on.

“This isn’t a problem that is confined to Mukwonago. Any time a native student from any district that sees his culture caricatured as a sports Mascot is affected.”

The Wisconsin Network for Peace and Justice brought up to a third of all protestors. They underpinned and sponsored the action in Madison. Find them at WNPJ.org

Former Mukwonago teacher and Editor of Struggles for Justice, Thomas Martin Sobottke, told a Madison TV 15 NBC news reporter that the ongoing battle “is a bitter soup.” He remained hopeful that recent signs Mukwonago is at least de-emphasizing its nickname and logo but not dropping it altogether “is a good thing.” Yet more action needs to come. Nevertheless, he added that the Wisconsin Indian Education Association has a fine curriculum that is ready and waiting if School Board Members and the District Superintendent Shawn McNulty, and the Mukwonago community simply take steps to work with the WIEA as has been offered to them as a resource so often before. That offer, according to Munson is still on the table and Native leaders of the Great Lakes Tribal Council have gone on record supporting this continuing, generous, and partnering initiative.

There was some mild trash talking by dozens of Mukwonago kids, primarily excited about their WIAA Semi-Final basketball game of course. You would not expect anything else. Certainly none of the protestors wished the team and fans ill. It was the nickname and logo issue that is the difficulty. For the students the memory of their school at State will stick with them all their lives and especially with the young men playing that game. Yet one man made an assertion that he himself disproved within a short sentence: “We are not racists you pigs!” referring to the protestors standing in mute witness. The irony of the man’s statement was not lost on the protestors!

Students from Germantown and Milwaukee were strongly supportive of the protest and yelled and cheered in groups. The Germantown Cheerleaders going into full cheer mode! Protestors thanked any who were supportive and they were the majority. One school’s numerous students of color nodded and said thank yous’. One kid yelled out and said “I did a paper on that!” Mukwonago School Board: students all over the State know all about your” problem” and they get it.

Perhaps, the thirty-one or so remaining districts in the State that yet have “Indian” nicknames and Logos might consider forming a group like “Racial Stereotypers Anonymous.” Whether in a 12-step program or just getting rid of the caricatures of Native-Americans outright, Dr. King reminds us all that “The time is always right to do right.” So it goes with Mukwonago also.

Sobottke pointedly asked reporters one question: “Why is it that only indigenous people in Wisconsin and around the nation must be so stereotyped racially?” What is so different about them in relation to all other groups who are no longer subjected to it officially? Who is listening to them? Why are those who engage in racial bigotry and the denial they are doing it seem so deaf?