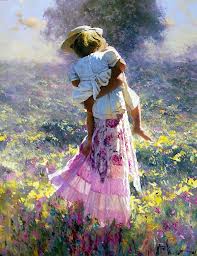 Soft sunlight of early dawn edges over hills
carved by the forces of a long lost glacial age,
through Wisconsin woodlands thick and green,
onto verdant fields
of corn and wheat
this Little Switzerland.

Plum City and Pepin where Uncle Christian
met Laura Engels Wilder
only to see them move away
to Minnesota and yet another Plum Creek
that would live in her stories
so touching, so neat.

The land abundant with life
our songbirds sing like
blooming flowers opening in striking color
no painter’s palate will ever hold,
rich valley soil, fertile
birthing families, planting them firmly to place and time
where they might grow green and thrive forever.

one Hans, one Gottfried
brothers,
linking two families
perpetually, from generation to generation.

A grandson asks who she might be
never having seen her
heard or felt
that comforting voice or soothing presence,

my father knowing it so intimately
abruptly taken from him , a childhood robbed
a dead place in his heart that would never be filled,
the little boy crying alone in a hayloft so solitary so lost,

for it was that cold December, its icy fingers at her throat
swiftly parting her from the world within hearing
of children, streets, farms, woodlands, and Plum Creek,
her husband utterly stunned that sad day in 1927,

so far from the commencement of a third generation in 1955
destined never to hear that songbird,
sister Gerdie
a matriarch for the ages,
telling the boy what Grandma Emily was made of.

The boy smiles and knows something of her joy
coming to that place where his family was birthed,
yet meaningful and redolent of rich soil
and those favored rolling hills,
Plum Creek, and that little town daring to call itself a city,
remembered still.

One thought on “Elegy for Emily by Thomas Martin Saturday”