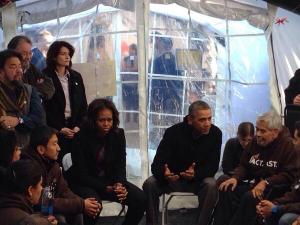 When looking at the failed Immigration Bill this year in Congress it cannot be blamed on Democrats or President Obama, his family, or a majority of American citizens who support such legislation. And it certainly cannot be blamed on those eleven to twelve million souls who need relief from immigration policies of a broken immigration system. The reason the bill failed was because House Speaker John Boehner and far too many Republicans and Tea Party members in the House of Representatives said no.

That no was not contained in a vote on the bill but in the inability of House Republicans to even bring the Senate passed bill to a vote.

That caused even Marco Rubio, the great Latino hope and leader of the legislation to run away from what he had done. The Senate passed the Immigration Bill, and nearly all Democrats and a few Republicans in the House stood ready to vote in support of it. There remains no doubt that President Obama will sign immediately any bill that provides a clear and just path to citizenship for undocumented immigrants.

How odd it is that Washington insiders are already labeling President Obama a lame duck President and saddling his legacy as President with all the failures of the House of Representatives since the GOP took over in 2010 to do the business of the country. Anyone pushing for immigration reform these past several years whether it is La Raza, the Dreamer activists with their energy and spirit, or Latino voters, and Americans generally who so wish to fully welcome our fellow citizens and neighbors of so many years deserves to know they are heroically standing for justice in the face of open injustice.

For Americans of all backgrounds the fundamental question you must ask yourself is:

How much do you want those eleven or twelve million people to be able to become legal citizens of the United States of America, along with all legal immigrants who themselves face huge delays as the system is broken in so many places?

How much do you recognize the present contributions of the undocumented among us, and like the Dreamers share that vision of an America where we value everyone who is part of the great democratic experiment begun by our founders in 1776. Do you realize just how much immigrants on green cards and those becoming citizens from every place both legal and documented and undocumented can and do contribute to the health of the United States of America?

If you have difficulties saying you do see the advantages of these things you are to be pitied. And what of our duty as human beings under any system of ethics, and under the Judao-Christian tradition that still dominates much of American religious life to welcome those who come among us and so need succor and support while they begin the process to be one of us.

How much are you excited by the thousands of new Americans who take that Oath of Citizenship before a Federal Judge and with family and friends suddenly hear it declared by the United States that they too are Americans!

A group of concerned Christians and other people whose sense of justice demands it have courageously begun to fast until an immigration bill is passed by the U.S. Congress. They live in tents in Washington D.C. where they model for us so dramatically the First Amendment right to petition our government for a redress of grievances.

It may be recalled that Women Suffragists stood in front of the White House day-after-day no matter the weather and held banners demanding Congress and especially the President, Woodrow Wilson, move to support the right of women to vote—to be full citizens in a nation they were born in. To remove the women, hundreds were arrested by police and violently attacked by passersby. Imprisoned, they went on hunger strikes and were eventually force fed by prison officials just as the men in Guantanamo, who though they might deserve detention do not deserve the kind of treatment they have received since arriving there so many years ago.

These Immigration Bill protestors who are non-violently fasting until a bill is passed, whatever fluids they are permitting themselves, are truly risking their very lives to call attention to the failure of Congress, particularly John Boehner and House Republican Caucus members to do justice to millions of undocumented immigrants.

President Obama and First Lady Michelle Obama, and earlier, Nancy Pelosi , visited the people fasting for this just cause. Where are John Boehner and House Tea Party Republicans? Marco Rubio? The Republican Senators who voted for the bill as it passed the Senate so hopefully this year?

Struggles for Justice still supports comprehensive immigration reform and demands that it include a clear and efficient and full path to American citizenship for the undocumented, and a more efficient immigration and naturalization process all around. We don’t blame the people who process so many citizenship applications or the wonderful judges who on our behalf welcome new Americans to join us to make this country even better.

God bless and protect the fasting protestors in Washington. And help the President and Democrats and those few Republicans who yet support comprehensive immigration reform to have the courage to champion it still—despite the conventional wisdom that is quite likely that doing so will be difficult and next to impossible. We at Struggles for Justice simply defiantly remove the words “next to impossible.” What the Dreamers dream are our dreams too.