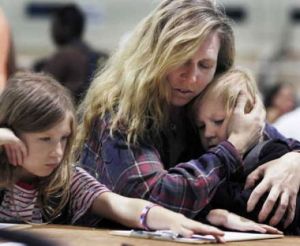 If you were able to view things from the perspective of the Son of God, that second manifestation of the Almighty, the Great I AM, the greatest teacher of all time, Jesus of Nazareth, you’d know immediately that any sort of ideological and partisan approach to the Christian faith itself is straying from the humble walk with our God we are called to make as People of the Way.

Disciples of Christ have responsibilities to fulfill and they are often not comfortable with them because, well, they are very hard things to do on a regular basis. Conforming with a secular world oftentimes puts us at odds with that world and we are looked at as strange and outsiders. We’re supposed to be different from the dominant secular world. Jesus said his Kingdom though it had come to Earth as Emanuel, God with Us, was not of this man-made secular world of ours at all.

That means no worship of big corporations and big money that become our idols. That means too that liberal Christians getting too intent on pushing liberal Democrats over Republicans in a partisan contest are not following the way laid out for our walk with Jesus. This is damnably hard to do for all of us of the faith. There is much hard teaching in the Gospel of Christ—the New Testament. It strikes equally at conservative literal interpreters of the Holy Bible in Bible Belt, conservative Republican Red State America, and liberal flexible interpreters of scripture in Liberal Democrat Blue State America.

My Christian brothers and sisters everywhere, we are in the same boat in regard to following the way of Christ. We face many of the same problems in freeing ourselves to do the hard things, to show ourselves different from the secular world that ignores our God at their peril.

Now I am not a hellfire and brimstone kind of guy; never will be. But we all know that Jesus is the way, and the light and the truth and that is that. Basically every human on earth is a sinner as we don’t perfectly put God first and fear him, meaning that we take full account of the fact the we ourselves are free to act as if we were ourselves gods but that is not true nor is it righteous in his sight; as far as the grace of our Lord, mercy and salvation through eternal life you can’t put yourself above God. That’s sin personified.

Liberal Christians DO need to pay heed to what the scriptures say about homosexual activity back in ancient Israel, in light of demands that churches fully marry couples too. That gay people in the LGBT Community must be fully accepted into the Body of Christ there is no debate—they are and should be. And as liberal social justice Christians we must face the hard truth that even with choice and full reproductive rights for women there must be a serious moral examination of the heart and our actions to make abortion much less common somehow, and uplift the sanctity of human life.

Conservative Christians must see that ministering to the poor, the elderly, the young among the poor, the orphan, the widow, the prisoner in our prisons and those who thirst, are hungry, ill clothed, sick, have no home, and more are at the center of our faith. The fact is that conservative Christian America allied with Republicans are quick to label the poor and people of color as unworthy of our aid, lazy, shiftless, and the main contributors to the criminal classes. Conservative Christian Bible Belt America does superior work abroad in mission work spreading God’s word but they miss the forest for the trees right here at home.

There is a supremely hard teaching from Jesus himself in the Gospel of Matthew 25:36-41. When we give water to those who thirst, food to those who are hungry, clothing to those without clothing, when we visit the sick and nurse them to health, take in and welcome the stranger, and visit those in prison and aid the poor, the oppressed by the powerful, the widow and the orphan we are doing that to God himself and he is pleased. And it does have according to what Jesus told his disciples and those present that day a direct bearing on our path to salvation or damnation itself. It is that important.

If we do not do these things for others, conservative Red State Christian America, we are NOT doing these things for God and God is watching to see if we do! It is all there in the scriptures and it is too plain to be argued. There can be no other interpretation.

So when you see liberal Christians making some rant for social justice, ministering to the poor, the elderly, the sick, and seeing to getting food and education for little children, they are doing God’s work by his command. They are NOT some liberal Democratic incipient force infiltrating the nation to ruin it. This is a job for every one of us who include ourselves as People of the Way.

And pushing government to do right by the poor, the oppressed, the orphan and the widow is strongly made by several prophets in the Judao-Christian tradition. Isaiah 10: 1-4 is quite chilling if you are a leader in any government of any time or place who rule as in kings and emperors and queens and princes, or govern in our more modern democratic states. Governments are also on the hook to behave better in relation to what Matthew sums up and quotes Jesus directly as saying are “the least of these.”

Now to Isaiah, my favorite prophet (actually we know he is three writers who God inspired with visions and messages to bear to us then and now.) Isaiah 10 says:

“Ah, you who make iniquitous decrees, who write oppressive statutes, to turn aside the needy from justice and to rob the poor of my people of their right, that widows may be your spoil, and that you may make the orphans your prey! What will you do on the day of punishment, in the calamity that will come from far away?”

If you govern, this is something to think about. If you are a Christian it is clear that government plays a central role in social justice to the poor, “the least of these.” So liberal type social justice Christians are acting in full accord with the discipleship of Christ here. Something also for conservative political Christians to think long and hard on just like the liberal ones must look hard and think hard about homosexuality in the Bible and even more especially uplifting the sacredness of human life.

Struggles for Justice and this writer are strongly for Choice and the fullest citizenship rights and acceptance for the LGBT Community. God bless you all. But we liberals have to think on what Christ teaches us. And there are some challenging, to say the least, scriptural passages in some parts of the old Testament. The New Testament or New Covenant with God and his people is more accepting. But we must think hard on this and not condemn conservatives who walk our walk of faith out of turn if they too are examining these things carefully and seriously.

I’m a liberal social justice Christian and I am faced with having to follow the entire path of Christ and not just that part of it that is convenient to my political views or social sensibilities. Conservatives ought to have the same quandary with what we do for the poor, how we see and relate to them, and what we demand government do. In ancient times the widow and the orphan were the least of “the least of these.”

They represent that group that would today be black and Latino and often white who use food stamps and sometimes need both welfare and unemployment insurance. Those living near at or below the poverty level are the ones Jesus is telling us so emphatically we have to help in order to be helping him. And they are most certainly the hard working folks looking for affordable health care, Medicare, and Social Security too-so called entitlements.

What we need my brothers and sisters in Christ is a much more united front—a more holistic and ecumenical Body of Christ. We are all the catholic church in the world. That is with a small c. WE are not two, three, or thousands of Bodies of Christ presented to those who are not of the faith. WE ALL are extensions of the hands, voices, and face of Christ bearing witness to God in our world. How are we doing with that? The answer for just about all of us is something we would not care to admit.

Our Christian witness must be as being One Body in Christ as called for in the Scriptures. Does that mean we have to worship in one version of the Christian church? No, of course not. But to demean or not grasp the Christian walk of those who are let’s say pro- life at the same time others demean social justice Christians is simply not acceptable to our Lord. We all know this immediately reading this now in our hearts and minds and it begins to penetrate our very souls.

So no, it is not. There is not or ought not be these differing basic views of the Christian walk: that humble walk with God we make to do good and right as Micah tells us in Micah 6:8. But we can find a group of believers we worship with regularly who bring out the best in us and help the Holy Spirit flourish like it should.

To you who are agnostics, atheists, outside the Judao-Christian or even Islamic faiths—The People of the Book, think hard on these things anyway. To make you feel better, the understanding of all this is the walk of a lifetime even for believers. It does as the scriptures say “passeth all human understanding” at many points.

What a world it would be, what a country the United States would be, if so-called liberal social justice Christians included pro-life meditations in their walk and conservative literalists of the Bible included social justice to the poor via direct help and pressure on those who govern us to do right by them.
Something for all of us to think on.